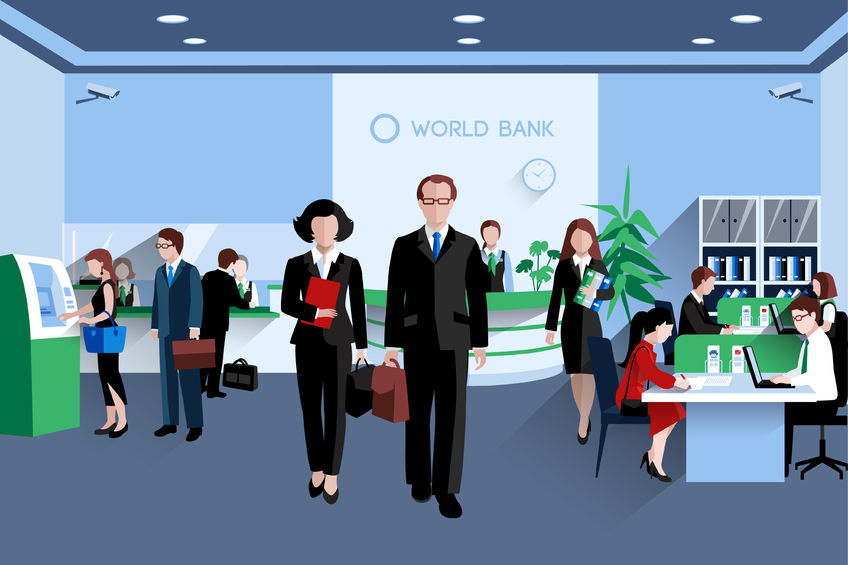 Economic development in South Korea over the last half a century has been spectacular. The economy has grown by an average of 7% annually, contracting only in two years for the past 50 years. To serve this ever-burgeoning economy, there are 148 banks consisting of 52 commercial banks, 5 specialized banks, and 91 mutual savings banks. Also, a handful of banks had quickly sprung up to cater to the rapid economic group across the country.

With $431 Billion as total assets as of the end of 2019, KB Financial Group is the largest bank in South Korea. With 26,000 employees and headquarters in Seoul, it had a market capitalization of $16 billion at the end of 2019. It operates through a number of subsidiaries which include Kookmin Bank, KB Kookmin Card, KB Savings Bank, KB Securities, KB Life Insurance, KB Asset Management, KB Capital, and KB Real Estate Trust, and KB Insurance.

Ranking as the 60th largest bank in the world, it was established in 2008 by the Korean government with its origin reported as a merger of other major financial institutions (Kookmin Bank and Housing & Commercial Bank) in the country. It operates via Corporate banking (loans, overdrafts, deposits, and credit facilities), life insurance, retail banking, credit card, investment, and other banking services.

It was founded under the trade name Hanseong Bank in 1897, offering retail banking services, corporate banking, international banking, and taking deposits. It has headquarters in Seoul and has so far 871 branches as well as 27 private wealth management service centers, and 14 branches in other countries. To meet the under said, the bank has approximately 21,000 employees with $341 billion as assets at the end of 2019.

It offers retail and corporate banking services through Shinhan Bank and Jeju Bank as well as credit card services and life insurance products through Shinhan Card and Shinhan Life Insurance respectively. It has also been praised for its services in securities brokerage, asset management, leasing and equipment financing, private equity investments, and mobile and internet banking.

Recorded in history to be the first modern bank in Korea, it began its operation by simply loaning money at low-interest rates from Japanese banks and in turn loaning it out to the Korean market at twice the rate. This method of operation was highly successful due to the fact that the doubled rate was at the time still lower than it could be obtained at the time in Korea.

The Shinhan bank in current times has reported an equity capital of KRW 9.7 trillion, and total deposits, and loans total $192 billion and $184 billion respectively.

Established in 1961 as a merger of the Agricultural Bank and Agricultural Federation, the group provides financing mortgages, personal lines of credit, corporate finance, real estate finance, and new technology finance services. On top of that, the bank has also ventured into life, property, and casualty insurance products. NongHyup has been documented as the safest bank in South Korea.

The merger was established in an effort to provide a national cooperative system to assist Korean farmers at the time who suffered from insufficient resources and poor capacity, which has since proven successful in terms of growth due to a separate establishment founded solely for agri-business in 2012. It now operates through 1,200 branches and is ranked as the third-largest commercial lender in Korea.

It operates 160 outlets in 24 countries, comprising 23 branches in America, 127 in the Asia Pacific region, and 10 branches in Europe and the Middle East. It is in 2012, that the bank acquired Korea Exchange Bank (KEB) From Lone Star Funds and Export-Import Bank of Korea.

The business operations of the bank are grouped into four segments:

With 16,000 employees, this is the 5th biggest bank in South Korea and offers a number of products and services for retail and corporate customers.

The Korean Government owns Korea Development Bank with its head office in the capital, Seoul. The bank came into existence as a result of the pressing need to stimulate the country’s economy and fast-track industrial growth in the 1950s. A specific legislative act was created to bring the bank into operation.

Korea Development Bank is among the biggest banks in South Korea. It has fastened the economic growth of thousands of small and medium-scale businesses within the country. Although it provides advisement for the management and rebirth of failing companies, it also offers other services such as corporate, international, investment, and deposit banking services. With over 3,000 staff all across the country, the bank currently boasts a yearly income that exceeds $20 billion.

As a subsidiary of a larger South Korean company, Kakao Bank was created in 2016 and began operations in 2017. Within the first year of service, the bank broke the record of getting over 200,000 clients on a single day. This bank brought about a technological revolution in the banking industry in the country as it was the first bank to introduce internet banking and its related services. Kakao Bank provides a wide range of banking services, which include savings accounts, current accounts, lending services, credit and debit cards, and more.

Kakao Bank currently has a client base that is more than 10 million with a deposit volume of over $14 billion.

Although the bank is regarded as one of the biggest banks in South Korea, it is considered a regional bank, which serves the Daegu-Gyeongbuk province. Created in 1967, DGB Financial Group Bank provides a variety of conventional and modern banking services, which include deposits, loans, internet services, and more. Also, it offers foreign currency for imports and exports, vehicle financing, and asset management. With a total income that exceeds $500 million, the bank has a collection of assets that exceeds $50 billion.

Its credit rating is at its best – AAA according to Korea and NICE investors service ratings. This means it has a very low investment risk, its capability to repay debt is top-notch, and its financial stability cannot be shaken by any environmental changes in the foreseeable future.

DGB has a solid social contribution structure that enables it to give back to the community in which it exists. It does so through a variety of social welfare services, hometown charities, educational charities, arts/culture, and sports businesses.

BNK Financial Group was initially called BS Financial Group up until 2015.  This bank began operations in 2011, and it has since grown into one of the biggest banks in South Korea. With its head office in Busan, BNK Financial Group has several subsidiaries that provide banking, investment, credit, and savings services. Additionally, the bank offers other services such as internet/mobile banking, asset management, deposit for housing, funding facilities, and much more. BNK Financial Group currently has a modest asset, which is valued at over $100 million.

This is the oldest and the largest bank in South Korea as it began operations in 1961. With its headquarters in the country’s capital, the Industrial Bank of Korea offers corporate services, retail services, foreign currency services, and card (credit and debit) services. It has over 500 branches all across South Korea and a few international offices. The Industrial Bank of Korea has a total asset value of about $250 billion.

The chief role of the industrial bank of Korea is to make affordable loans available for SMEs across the various industries for Korean citizens, not only in Korea but also those living outside Korea, through its international branches.
From its inception until 1994, the bank’s issued share capital was solely held by the Korean government. However, the bank has gradually been opening share capital ownership to the Korean public, and as of March 2022, the government share stood at 59.5%.

Korea Eximbank is also known as the Export-Import Bank of Korea. It is the bank that provides South Korean companies access to credit and credit facilities for exportation and importation. Created in 1976, the bank’s purpose for creation was to open up the South Korean economy by funding megaprojects that are related to exportation. Apart from providing credit accessibility to the country, the bank is also actively involved in providing financial aid to other businesses in other countries through two key government funding programs.

In 2013, the bank rolled out a $1 billion credit and load program for the development and increase awareness of South Korean entertainment.

Citibank Korea is owned by the famous Citigroup. This bank began operations as KorAm Bank. An internal restructuring within the bank led to the facility being purchased by the Citibank Group for an undisclosed amount in 2003. Citibank offers Koreans a wide range of banking services, which include savings accounts, current, accounts, credit and debit cards, and much more. The bank has several branches across the country. Each branch is equipped with at least an ATM that allows for the use of both local and international cards.

Among its strategic services that are highly digitalized is mobile banking, which allows customers to conveniently check deposits or make withdrawals without having to visit the bank.

Internet banking allows its customers to access and manage their accounts virtually. It also has the Alimi service that enables customers to get instant activity on bank accounts through SMS service.

It also supports telebanking for customers to make timely money transfers, loss or theft reports, and bank balance and loan inquiries via phone calls from anywhere around the world.

K Bank is a strictly online banking service, which is owned by KT Corporation – a Korean telecommunications company. K Bank began operations in 2017 immediately after the mother company was given a license to set up an online bank. The launch of the bank was so successful that more than 200,000 customers signed up for various services within the first few weeks of its operations. K Bank provides its clients services that are similar to what is obtained at conventional banks. The only difference is that they do so mostly via the internet.

The Bank of Korea is the apex bank in South Korea. Established in 1950, the bank’s main function is to provide price stability by controlling inflation and the value of the country’s currency.

As the central bank of Korea, it is not only the government’s bank but also the banker’s bank. It issues notes and coins, manages the country’s foreign exchange reserves, provides oversight over all the other financial institutions in the Republic of Korea, and also formulates and implements credit and monetary policies.

Its overall goal is to provide price stability, and currently holds foreign reserves of US$510 million. It was established with a capital of 1.5 billion Won, which was subscribed by the South Korean Government.

Within the last 50 years, South Korea has seen rapid economic and financial growth. This development created a conducive environment for many financial institutions within the banking sector to grow and flourish into large institutions that have positioned South Korea as one of the commercial powerhouses in the World.